Microsoft unveiled its newest version of Windows last week. While the company was more than happy to tell us abouta bunch of new features, naturally they left a few out. Here are some of the best things we found while poking around with the new OS.

All the New Stuff Coming to Windows 10

Microsoft gave us a small peek at the next version of Windows today, confusingly dubbed Windows 10. …Read more

If you want to try out the Technical Preview right now, you can read our guide here. Keep in mind, though, that this software can and will change before it finally reaches consumers. Microsoft will probably add more features to the list and even the ones we talk about here may be changed (or removed!) before it's released to the public, so don't take these as a promise from Microsoft. They are pretty cool, however.

How to Install the Windows 10 Technical Preview Right Now

The Command Prompt Got Way More Than Just Ctrl-V 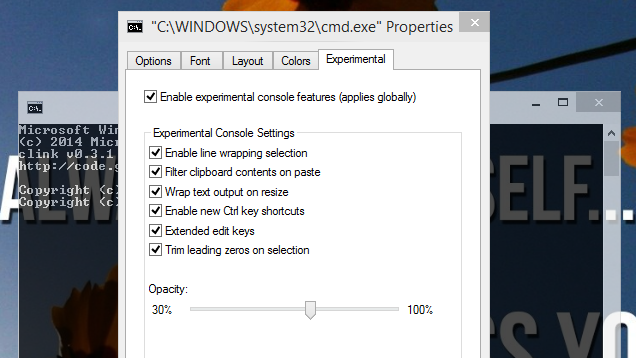 Microsoft made an unusual point of specifying that Ctrl-V would work inside the command prompt. As Whitson discovered in our walkthrough, however, there's a lot more. Right-click on the title bar of a command prompt window, select Properties, and click the Experimental tab and there are several other new features you can enable.

The Windows 10 technical preview is out with a peek of some new upcoming features. If you…Read more

Some of the features are less obviously helpful, like the ability to alter the transparency of the window (but it only takes effect on restart, making it only marginally useful). However, some are exceedingly cool. For example, you can now wrap text to the edge of the window, as well as adjust the width to whatever you want. The text will even wrap on resize! There are also new text selection features and the ability to filter input when pasted to avoid the odd errors with smart quotes and all that. Be sure to try them all.

Notifications Are Getting a Makeover 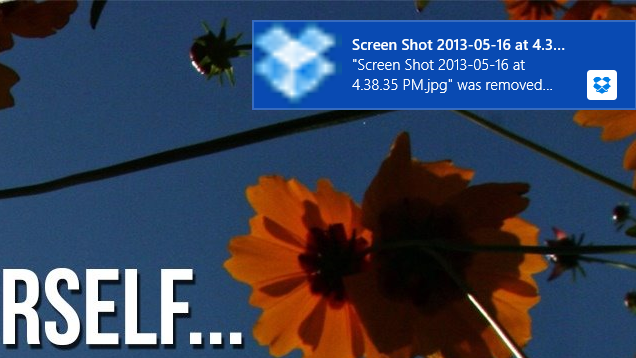 Notifications in Windows have never really been all that unified. Part of this is because developers make their own notification systems ( looking at you, Google) but "notifications" have also usually been limited to small bubbles appearing in the bottom-right corner of the screen. In Windows 10, you might notice a few more of them getting prominent placement.

Dropbox, as a fairly ubiquitous example, now shows notification of synced files in a larger, rectangular pop-up in the upper-right corner of the screen. If you used any don't-call-it-Metro apps in Windows 8, these notifications will be familiar. While the changes seem to only be cosmetic right now, we've heard rumors that Windows 10 will have a full notification center upon release. This seems to point heavily in that direction.

Here, Allegedly, Is the Windows 9 Notification Center In Action

This week, we saw leaked images of what was purported to be Windows 9, showing a new toolbar with…Read more gizmodo.?com 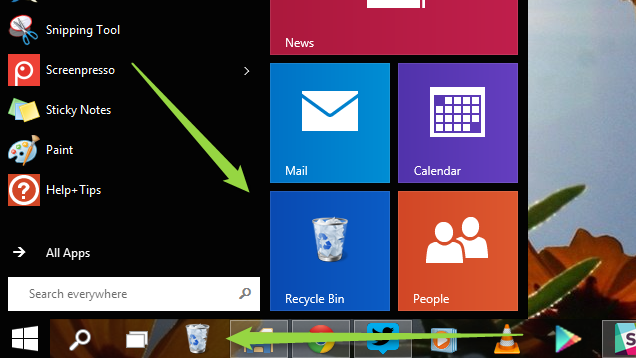 For uncomfortably unclear reasons, pinning the Recycle Bin to the taskbar has always been needlessly complicated. In Windows 10, the option is now available with a simple right-click. Open up an Explorer window and, under Favorites, click Desktop. Right-click the icon that says Recycle Bin and you now have the option to Pin to Start.

Explorer Has a New "Home" With Your Most-Used Folder Locations 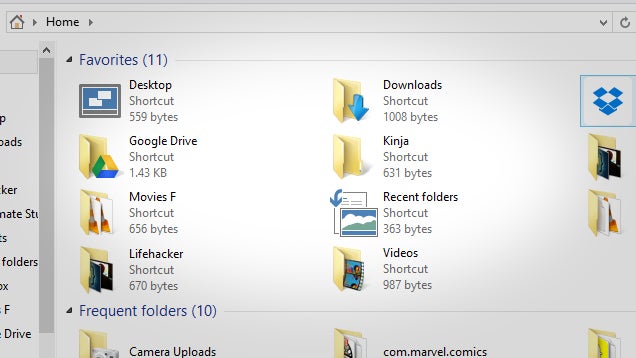 In previous versions of Windows, if you launched an Explorer window, you would find yourself at a list of your drives and some basic libraries. In Windows 10, there's a new "Home" section of Explorer that acts as a default landing page when you open a new window. This window shows any locations you've designated as Favorites, as well as your frequently-used folders and recent files.

Find Recent Files in Windows with the Run Dialog

Windows has a number of ways of finding recently used files. However, it also has a unified folder…Read more

You can access this new Home location from the sidebar in any Explorer window. While that's a little redundant if you're trying to access favorites, the quick way to reach recent files and common folders could prove invaluable. 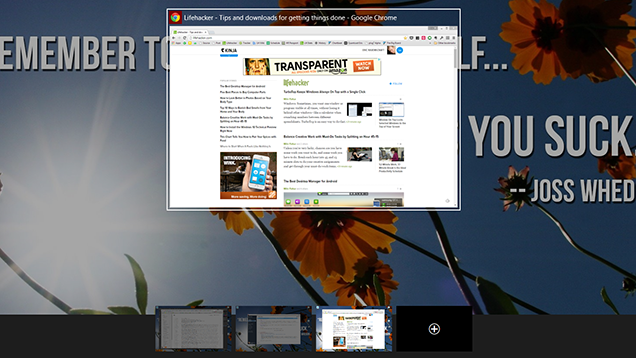 If you're an avid Lifehacker reader, you probably had one key question when Microsoft debuted multiple desktops: will it have keyboard shortcuts? Well, good news! You get two. The first is Win-Tab. Those with long-term memories might recall that this shortcut was used in Vista as a fancier version of Alt-Tab. Now, instead of alternating applications, Win-Tab will bring up the Expose-like interface where you can create or switch between multiple desktops.

Additionally, you can press Ctrl-Win-Right or -Left to move between virtual desktops immediately. In the Technical Preview, there doesn't seem to be any animation to convey that you're changing desktops like OS X has, but it's still a very welcome method for switching.

File History is Now Its Own Tab in Properties 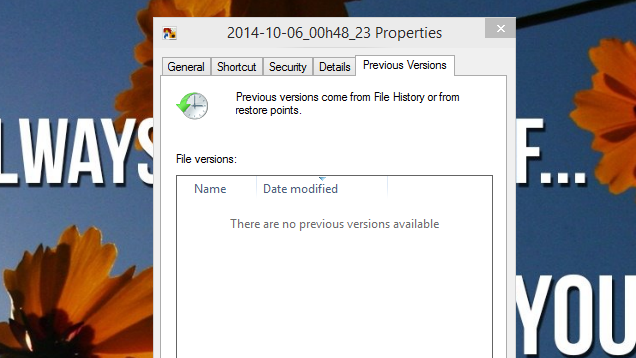 One of Windows 8's own cool, hidden features was File History, which was essentially OS X's Time Machine for Windows. While this backup feature isn't new, you can now access a particular file's previous versions by right-clicking it, selecting Properties, and clicking the brand new Previous Versions tab. Super handy.

It wasn't one of the more publicized features, but Windows 8 actually comes with a brand-new…Read more

Update: Some users are reporting that this has always been around. When we checked Windows 8.1, it wasn't there, and the File History feature has evolved over the years so a form of this may have existed in past versions.

Cortana Is (Probably) Coming to the Desktop 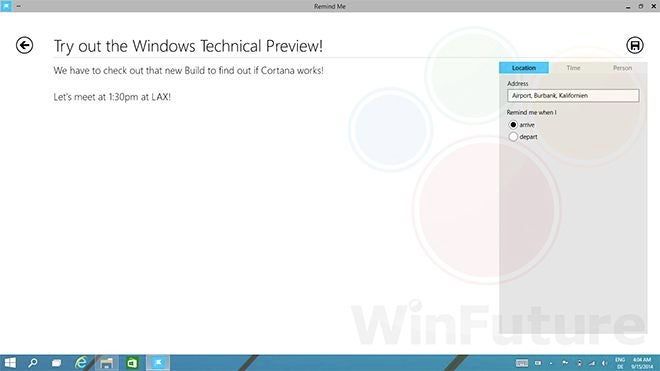 When you consider Windows alongside mobile operating systems, its antiquity becomes more apparent. Android and iOS, for example, can both accept a wide variety of voice commands and do many functions directly from search. Microsoft has been working on a voice assistant called Cortana that's allegedly supposed to appear in Windows 10 before its released.

The feature is, unfortunately, not available right now. However, proof of its existence has already surfaced online, and other news sources have reported that they've seen it in action. Obviously you shouldn't install the technical preview in the hopes of playing with it just yet, but it couldn't hurt to make sure your computer has a microphone before the full version drops.

This is how Cortana works on Windows 10

Microsoft showed off a small number of Windows 10 features at the company's event this…Read more theverge.?com

You Can Give Targeted Feedback Directly to Microsoft 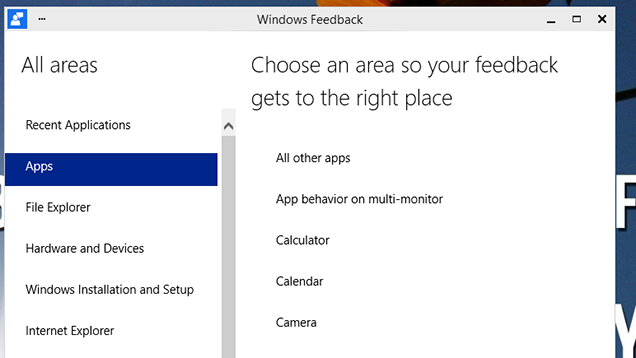 This one isn't so much a secret feature of Windows 10 as much as the primary reason you might want to try out the preview. Microsoft has created a feedback app specifically for users of this Technical Preview. While using the OS, Windows will occasionally ask you for feedback for certain features, but you can also leave your own.

If you've ever complained in a comment thread or written a twenty-paragraph article venting frustration over Windows (I'm guilty of both), now's your chance to let them know exactly how you're feeling. It's not uncommon for Microsoft to solicit feedback from a beta, but the system for submitting input is incredibly easy, so it's worth mentioning on its own. There's never been a better time to tell Redmond what you want.

All-in-all, Windows 10 is already a pretty solid improvement over Windows 8. And we can already see that new features are coming. There are also a wealth of Metro-style apps that, while technically not new, are worth exploring now that they're not locked in a cumbersome fullscreen mode. As an example, the Photos app contains some pretty sweet photo editing features, similar to what you might find on a phone. Time will tell what else is new, but for now there's plenty of cool new toys to play around with. Even if they were left out of the keynote.